MetalliPara Fanon Wiki
Register
Don't have an account?
Sign In
Advertisement
in: Fanon OC's that cause spoilers, Jokes, Fanon OC's,
and 9 more

Note, this is my 1st joke OC. If you bully Noun-chan, Pro-chan, and other subjects, you're banned.

MetallicBlue is a joke fanon OC which is known as the impossible master of Noun-chan itself, and it is a virtual robot.

MetallicBlue is a true kind of master who triggers a lot of problems out of MetalliPara members in Metallica Paradise. Its intelligence will be required if someone has a special Cyalume Mic and a Cyalume Guitar.

MetallicBlue is also a little shy. Because of its soft-spoken voice, it can go towards people.

AHAHAHAHA WHY WHY DID I JUST WROTE and why is this article SO LONG????

MetallicBlue only likes puppets and puppeteers.

MetallicBlue is afraid of pronouns. 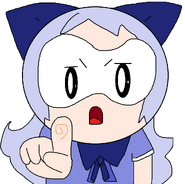 FOLLOWING FOR NOUNS AND METALLIPARA YEETER
Community content is available under CC-BY-SA unless otherwise noted.
Advertisement